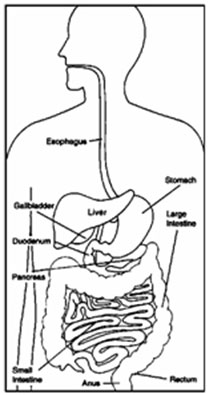 The digestive system — which can be up to 30 feet in length in adults — is usually divided into eight parts: the mouth, the esophagus, the stomach, the small intestine (or “small bowel”) and the large intestine (also called “large bowel” or “colon”) with the liver, pancreas, and gallbladder adding secretions to help digestion. These organs combine to perform six tasks: ingestion, secretion, propulsion, digestion, absorption, and defecation.

The mouth starts the process by ingesting and mechanically breaking down the food we eat into a swallowable form, adding some early secretions to start the process of digestion. The esophagus is the muscular tube connecting the mouth to the stomach. A ring-like muscle at the end of the esophagus controls the passage of food into the stomach. This ring-like muscle also controls the food from going back up into the esophagus. The stomach then further liquefies the food and adds digestive acids. 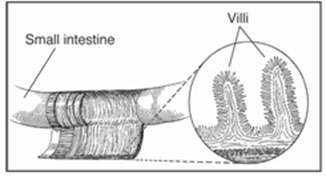 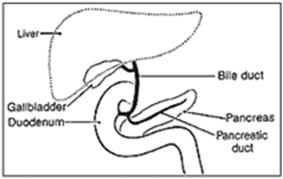 After traveling through the nearly 20 feet of small intestine, unabsorbed material moves into the colon (large bowel or large intestine). Here the remaining liquids and salts (electrolytes) are absorbed from the digested material. Bacteria further break down the undigested material, which continues to solidify and eventually passes from the body as feces through the rectum and anus during a bowel movement.

For more information about your health condition, click here and enter your criteria in the search box in the middle of the page. You can also click on the links on the sidebar at the left.

Infusion therapy is performed when a patient does not respond well to other treatment methods.

A multi disciplinary center of excellence for adults and children with Crohn's Disease and ulcerative colitis.